Leaves change and fall, sweaters are donned and activities shift indoors. Autumn may encourage us to snuggle in a comfy chair and sip cider, but don’t forget to exercise first. It could mean better brain function as you age.

A new study shows yet another a correlation between physical exercise when younger and improved cognitive function when older. This study confirmed better physical fitness in older men directly correlated to better cognitive function.  A group of older Japanese men underwent tests to measure their aerobic physical fitness.  They then underwent a cognitive test known as the Stroop test which measures attention, executive function (decision-making) and reaction time.  Their reaction time measured brain function, while at the same time their brain activity was measured using functional near infrared spectroscopy (fNIRS).

The results indicated the more physically fit the men were, the better their brain function was assumedly by using a portion of the brain typically used more by younger individuals. When younger, we use more of the left side of our prefrontal cortex of the brain for the type of skill tested by the Stroop test.  When older we use both sides of the prefrontal cortex to compensate for age related decline.  But the fitter men in this study were identified using the left side more. It seems they were able to access and use this portion of their brain more effectively due to their higher level of physical fitness.  More study is needed to confirm, but this could be because the fitter men were able to better maintain the white matter in the brain that typically declines with age. 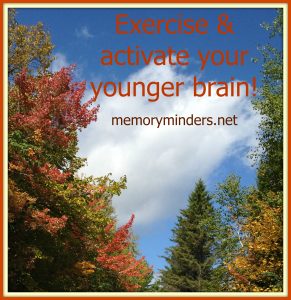 This study is yet another reason to get up off the couch and exercise aerobically! It will not only help your body age better, but also your brain.  Then after a great workout, snuggle in, enjoy some cider and watch the leaves fall.