No one is perfect.  Anyone can have an off day, moment or split second.  Watching the Olympics unfold, it’s always interesting to watch how the athletes handle wins but also losses.  Are they gracious in victory and defeat? It turns out much of their reaction is determined by earlier attitudes.

The high achievers seem to hold a positive proactive coping and ‘learn from it’ approach to challenges.  When a lesser outcome was experienced, they tried to learn and grow, instead of reacting poorly or being discouraged by a negative result. 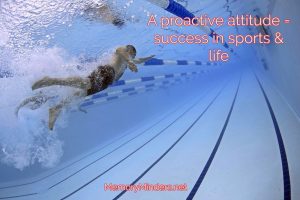 In the last week of the Olympics, we’ve seen both examples.  The gracious, humble athlete in both victory and defeat will always get gain much more in life than just victories in their sport.  That attitude will carry over into the rest of their lives as well.

The way we approach challenges in our lives matter as well.  Are we learning and growing in challenging moments or lamenting our plight?  I know too often I see the glass as half empty.  But I’m aware of my tendency and try to shift to a more proactive approach.  A positive outlook will not only benefit me but also my memory and overall quality of life.[tweetthis]A positive outlook helps both body and mind perform better![/tweetthis]

Studies have shown those with a more positive approach to life enjoy their lives more but also perform better mentally and have sharper memories.  Is your glass half empty or half full?  We may not all be super champions but taking a cue from them, let’s try to employ a more proactive, ‘learn from our challenges’ in life approach.  It won’t necessarily equate to a gold medal, but it will lead to more memorable moments.