It seems fitting after watching the Big Game that we discuss new research on concussions, head injuries and their impact on our brains. The brain is the most underrated yet important organ of our bodies. When a head injury or  concussion happens, it may appear as though recovery has occurred, but often residual damage lurks and can even lead to dementia.

Research conducted at Georgetown University Medical Center provides new insight on the long lasting effects of concussions. It reveals rest for more than a day is the best recovery strategy after suffering a concussion. The study also demonstrated that repeated concussions leads to increasing damage and brain inflammation that remains present a year after the injury.

In this study, mice that had a single insult to their brain quickly lost 10-15% of the brain connections in their brains, but no inflammation or brain death. With three days rest, all brain connections were restored. But with daily concussions, the mice brains showed inflammation and white matter brain damage. This damage became progressively worse and was still evident a year later.

Concussions typically occur due to sports injuries or accidental trauma. The best way to avoid all of this is to prevent concussions in the first place. Wear a helmet when doing any type of activity that could potentially involve an injury to the head. Or better yet, ask yourself if that activity is necessary. If so, remember to protect your head, it holds the most important organ you have! 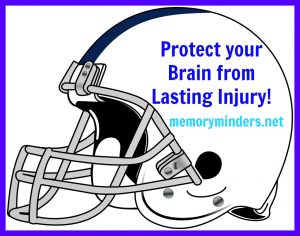 Another research study revealed those who have had traumatic brain injuries develop brain clumps similar to those associated with Alzheimer’s disease. Previous research identified these clumps were present shortly after an injury, but this research shows they are still present over a decade after the injury! This could help explain why those who have had brain injuries are at a greater risk of developing dementia in later life.

Researchers at the Imperial College London who conducted the study are hopeful this information will lead to greater understanding as to why those with brain injuries have lasting deficits such as lowered concentration and memory. It also provides further information to the growing awareness of head trauma and encouragement to  prevent and protect ourselves against these injuries.

Let’s pay attention to our brains, safeguard them at all costs and take action if we notice any changes after an injury is sustained. Our brains are a marvel of creation, let’s protect them!