I am so thrilled Julianne Moore won a Golden Globe for her role in the film Still Alice!  The movie is based on a book of the same name by Lisa Genova and I highly recommend the book to anyone who wants to better understand living with early onset Alzheimer’s disease. 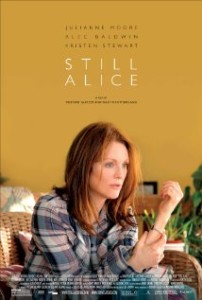 It is my sincere hope and prayer  this movie will bring a greater understanding of dementia and Alzheimer’s disease which impacts over 5 million people in the U.S., 200,000 of whom have the early onset form.*

No one wants to hear the words Alzheimer’s or even the term dementia.  The stigma around Alzheimer’s is comparable to how we didn’t use the word breast cancer in the 1970’s.  But Alzheimer’s is a disease just like cancer, heart disease etc.  It isn’t contagious but we treat it and those who have it as though it was.

The one thing most people are afraid of as we grow older is not growing older itself, but not having our minds intact as we do.  It’s a huge fear and when we see it happen to a loved one or friend it becomes personal.  Often people don’t want to discuss dementia and Alzheimer’s.  They feel ashamed.  They don’t want them or their loved one to be thought less of or labeled.

You are still you and I am still me no matter what disease we may get in the future, even Alzheimer’s.  That’s what this movie is about.  It’s sad, but it’s also reality for many people.  Ignoring it doesn’t make it go away. Doing something about it like joining the fight for more research or helping someone you know who has it can make a huge difference.

So kudos and congrats to Julianne, Lisa and all the filmmakers for taking on this subject and helping us gain more perspective and empathy and less stigma.  Go see the movie and take along some tissues.  Then go home and help someone you may know with Alzheimer’s &/or dementia.  Just like Alice, they are still the same person, even with dementia.