I hate the treadmill. It’s really a love/hate relationship.  I love how it allows me  to exercise on bitterly cold days, but hate the monotony.  I’d rather be outside but I make time to walk the belt to nowhere and new research is encouraging me. Two recent studies coming from the Framingham Heart Study  show associations between heart and brain health. Cue the treadmill.

One study discusses how new cases of dementia, specifically vascular dementia, is on the decline over the past three decades. This great news suggests some cases of dementia may be preventable or at least slowed in progression through effective stroke and heart disease management. As the baby boomer generation ages, incidences of dementia in the next decade are expected to explode. This research gives hope to potentially lowering that number. Interestingly, the decrease in dementia incidences came only among people with at least a high school education. Exercising body and brain are clearly the take away interventions to be learned from this study.

Having a family history of vascular and heart disease, exercise has long been on my radar screen. Studies such as this encourage and underscore the impact and relationship between brain and heart health. MemoryMinders programming has always included this connection because heart health=brain health.  Another study proving this and encouraging my treadmill habit was also gleaned from the Framingham Study. 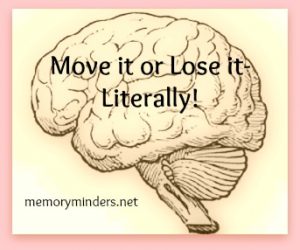 Researchers found a direct correlation between poor physical fitness and decreased brain volume decades later. Those who had lower levels of physical fitness had smaller brain volume almost twenty years later,  measured by MRI brain scan and cardiovascular fitness noted by a treadmill test. This lowered brain volume in the lesser fit equated to one to two years of accelerated brain aging. Essentially the less fit; the smaller the brain. Brain volume is an indicator of brain aging. The less brain we have, the less brain we can use.

If preventing heart and vascular problems aren’t enough to get me on the treadmill, preventing accelerated brain aging and dementia sure will. So let’s move it so we don’t lose it-literally!